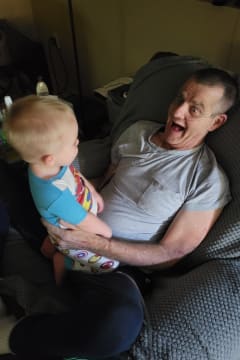 Bruce John Buchanan, age 63, of Holiday, Florida, passed away peacefully at home on October 14, 2021, after a chronic illness. Just like he dealt with all experiences in life, Bruce managed his illness with strength and grace. He was fortunate enough to have spent the last seven months surrounded by his daughter, Elizabeth; her husband, Andrew; and grandson, Victor, who he adored more than anything in the world.

Bruce was known for his kindness, love of family, being a hard worker, working on cars, and maintaining his prized fish tanks.

He was a loving husband to the late Cyndi as well as an amazing father to their beloved daughter, Elizabeth. He was Elizabeth’s first love and her hero.

He leaves behind his daughter, Elizabeth; son-in-law, Andrew; and his precious grandson, Victor. His is also survived by his two sisters, Martha (Glenn) of Wisconsin, and Dorothy (Jerry); two nieces, Sarah and Megan, of Michigan; as well as numerous cousins and friends. Bruce also leaves behind his dog, Boscoe, his best friend.

One of Bruce’s biggest accomplishments was being a father to Elizabeth. He will be truly missed for his ability to think outside the box to fix any issues.

There will be a private service at a later date.